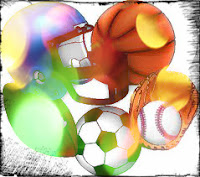 English is an idiomatic language, meaning that the use of idioms in every day conversation are an important part of the way we use language to communicate. However, learners of English and even advanced students often find it challenging understanding the meaning of these words and phrases. There are a huge number of idioms in English and I find a useful way to learn and classify them is to divide them into groups. Today I want to focus on common phrases that uses phrases or words found in popular sports. This is a very common category and it will serve you well to understand some of the more common idioms in this section as they are used quite often in conversational English. This is not an exhaustive list, and I will make further posts as this is quite a long category to cover!

Ballpark figure - I don't need an exact number on your test score, just give me a ballpark figure. (meaning to give an estimate).
Came out of the left field- He came out of left field, I was taken completely by surprise with his actions. ( meaning an unexpected occurrence).
Cover all of one's bases- I think I'll be completely safe with that insurance, it covers all of my bases. ( Meaning to be extremely well prepared and covered).
Drop the ball- You really dropped the ball on fixing the car, everything is broken! (meaning you didn't do it properly, you weren't accountable and didn't do a good job).
Hit a home run- She hit a home run when she got that job. She's so lucky! (To reach or obtain a big goal. In baseball it means the batter hot the ball so far that he could run around all four bases before the fielders were able to throw the ball back).
Home free- Now that we've escaped the cops we're home free! ( Meaning to be out of trouble).
In full swing-The party was in full swing by the time I arrived. ( Meaning the party was at the height of activity).
Off base- You missed the point on my last lecture, I thought your comments were a bit off base. ( Meaning the ideas were not understood properly).
Pitch an idea- She pitched an idea that we all go together instead of taking separate cars. ( Meaning to share an idea with others in order to get their agreement and co-operation).
A curve ball- She threw me a curve ball with that presentation, I definitely didn't see it coming! ( Meaning to be surprised by an action).
Play hardball- Now that the practise round is over, it's time to play hard ball! ( Meaning to play for real, in a determined way).
Right off the bat- Right off the bat he knew what he was doing. ( Meaning immediately)
Step up to the plate- Somebody needs to step up to the plate and do this difficult presentation. ( Meaning to take responsibility on, often of a challenging nature)
Take one's eye off the ball- I took my eyes off the ball for one second and I missed the opportunity.  (Meaning to lose concentration or focus)
Touch base- Let's touch base on Sunday, it's been forever since I've heard anything from you! ( Meaning to connect with someone, to be in contact)
Whole new ball game- It's a whole new ball game now that Sally has taken over, I don't expect anything shall be the same. ( Meaning a new set of ideas or approach- different than before)
Slam dunk- He slam dunked his performance, I've never seen him perform so well. ( Meaning an excellent performance)
Call the shots- Dad's the one who calls the shots when we go on holiday. No one else gets a say. (Meaning the person is in charge. The person who calls the shots has all the decision making power)
Play the game- Just go along with the joke and play the game! ( Meaning to be a part of something.)
Name of the game- Greed is the name of the game in gambling. ( Meaning that this is the definition of something. Abba the famous Swedish pop group had a song called the Name of the Game. Goggle the lyrics!)
Give the game away- She gave the whole game away by telling the mum about the wedding before Sarah. ( Meaning to share a secret or give away inside information.)
Game plan- How are going to approach this new report? What's the game plan? ( Meaning plans and ideas, strategy.)
Team player- I work well together with other people, I'm a real team player! ( Meaning that the person likes to work with other people and will do their part to help the group reach its' goals.)
No sweat- No sweat Jimmy, it wasn't really a big deal anyways. ( Meaning no problem.)
In good shape- We have to get in good shape for the next debate if we want to win. ( Meaning to be well prepared.)


I'll add more idioms to the list soon so check back later!

My new ebook! Only $4.99 for a limited time. Email me for a copy at esltutor7@yahoo.com

Everything you need to know to ace the IELTS Speaking Test